Skip to content
The Incinerator Gallery is now open.
For further information about being COVID safe during your visit click here.
We look forward to welcoming you back.

Moonee Valley has an Art and Heritage Collection that reflects, celebrates and contributes to the authentic and distinctive culture of Moonee Valley.

This exhibition brings together key works from the Collection that surface contemporary and historic vantages of waterways flowing through the municipality.

This artwork by Marlene Young was presented to Cr. Don Cornish, the Mayor for Moonee Valley City Council, on 15th April 1999.

The painting features as the cover design for the booklet The Wurundjeri Willam - the Original Inhabitants of Moonee Valley that was produced in 2012 by Moonee Valley City Council as part of their community focus on Reconciliation.

Published in this text, Marlene Young says of this work:

After reading the brief you sent me I was quite saddened to learn how the land was abused and destroyed with no thought given for future generations. Plant and animal life was lost for good and this drove the Aboriginal people to slaughter  sheep to survive.

This painting is of the Maribyrnong River, and the surrounding area. The red is the blood that flowed in the river, while the colours on the outer side of the riverbank are from the tanning process that polluted the river. The animal tracks are kangaroo, possum, emu and lizard, and there is also an eel trap. The Aboriginal people hunted all these animals for food and clothing. 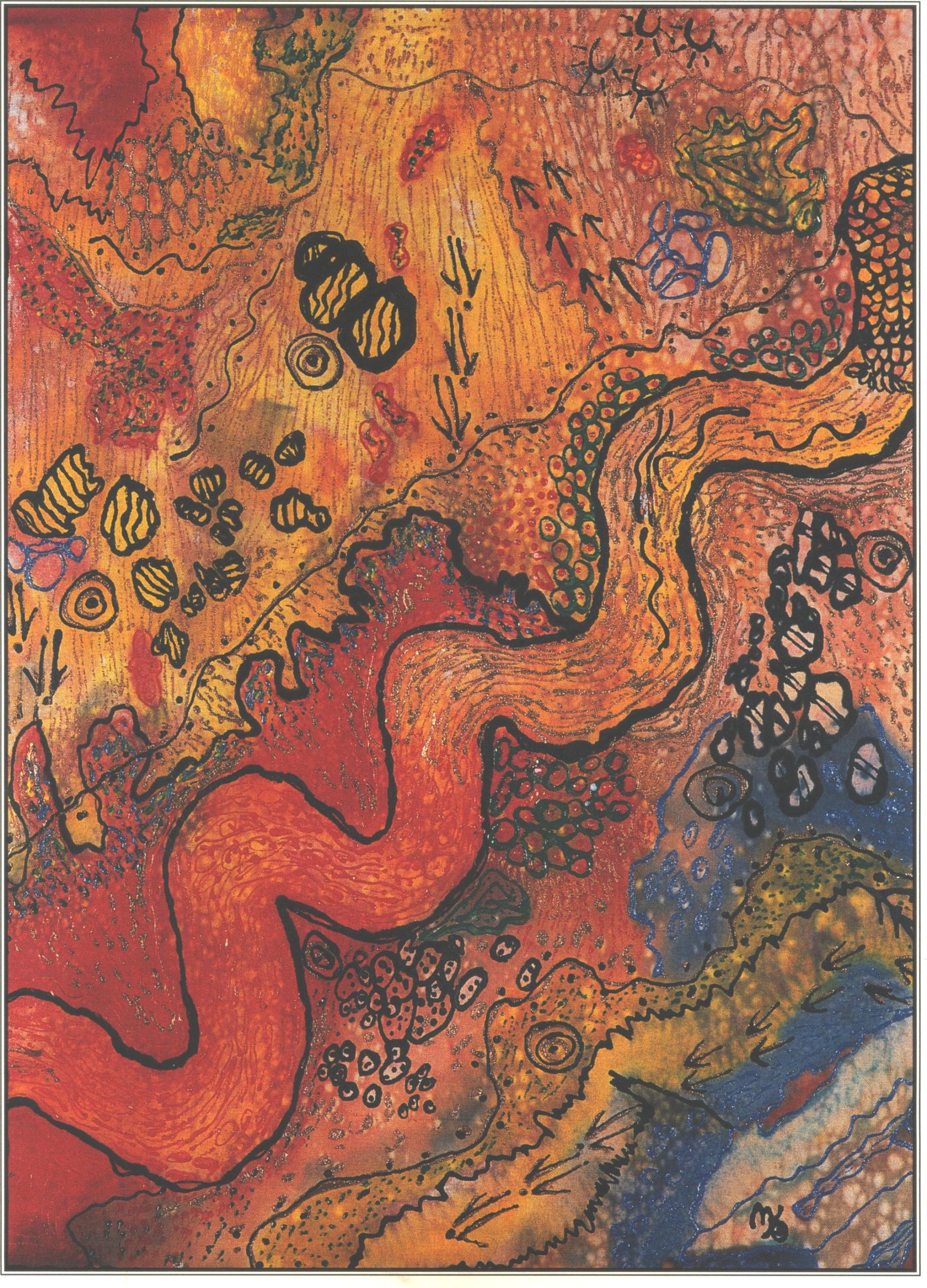 Marlene YOUNG
Deconstructing the Land, the Red River (1999)
acrylic and dye on silk

Four different groups are depicted here with different markings. This land was once plentiful and well cared for by the people and they had their own system of burning off to encourage new growth for the next season.
Many of the plants have been destroyed for good now, and the animals are not living in the area any more except for perhaps some possums.

Aboriginal people only hunted what they needed to eat, and the skins were used to make cloaks and to wrap babies. They respected the animals, the land and the plant life, only taking what was needed, and they always gave back to the land. 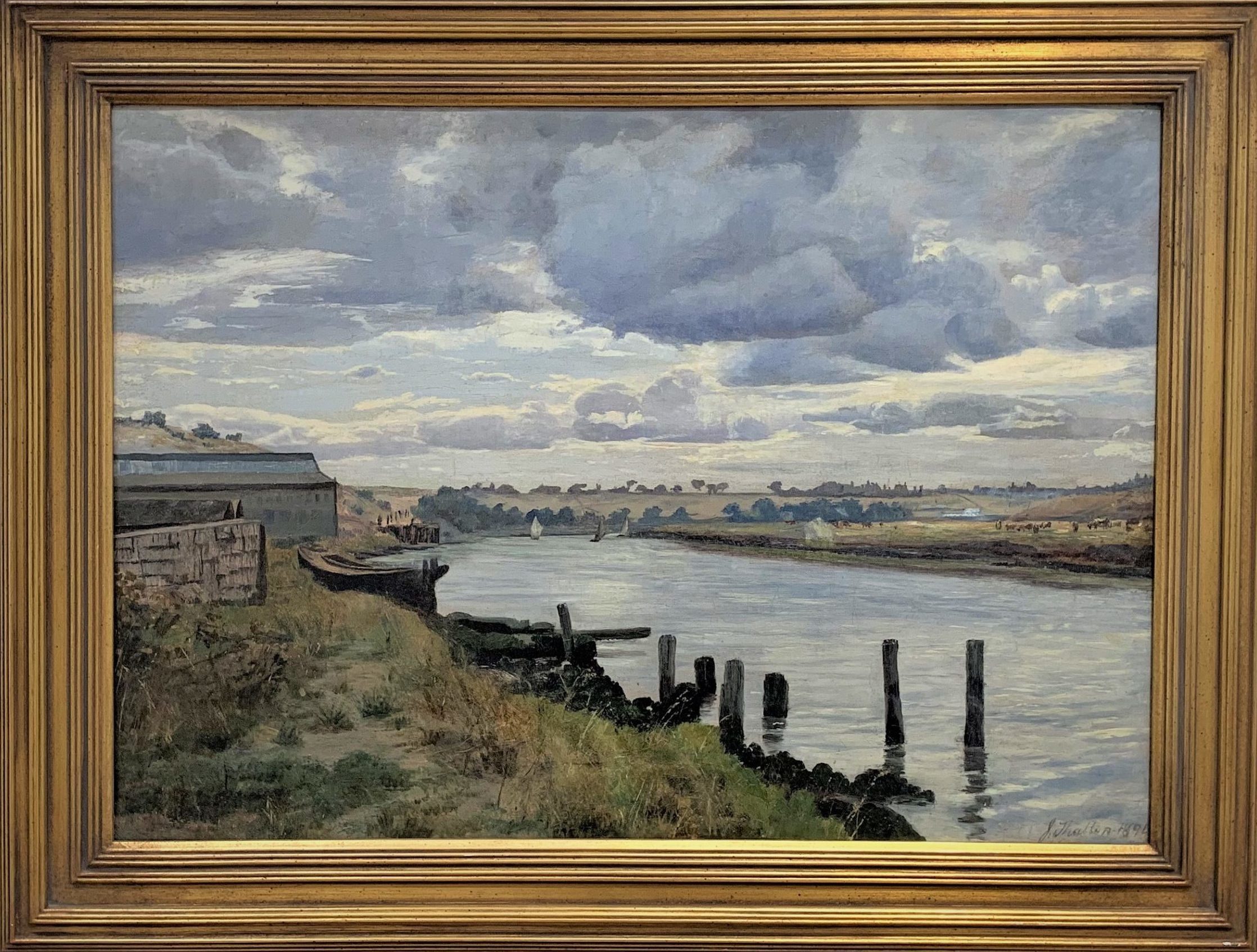 John Thallon was born in Scotland in 1848. He immigrated to Australia in 1876 and settled in Melbourne. While he was primarily known as a framer, he was also recognised as an avid painter, with many of his works featuring views of the Yarra River around Studley Park in Kew.

John Thallon worked with many of Melbourne’s leading artists and by 1880 he included Tom Roberts, Fredrick McCubbin and Arthur Streeton as both his clients and friends. He designed and constructed the frames that still adorn many of Australia’s well-known paintings, including Tom Roberts’ Shearing the Rams (1890).

Maribyrnong (1894) is recognised as an important painting in the Moonee Valley City Council Art Collection because it documents the then-named Saltwater River at a distinct period in its history. It was painted from a position almost directly below where the Highpoint Shopping Centre now stands - the Raleigh Street Bridge is just around the bend but out of view. The work was painted en plein air, which means that it was executed outdoors with the artist physically positioned and painting directly in the landscape. Like his Impressionist colleagues, Thallon was attempting to capture the nuances of light and document on the canvas exactly what he saw in front of him. To this end, he does not romanticise the scene - he includes the plain grey buildings and the old dock that has fallen down. It is a cloudy day, and while this adds more grey to his composition, you can almost feel a cold wind coming off the water.

By 1894, the year that this painting was executed, the Maribyrnong was quite a polluted river, there was industry along the banks including a tallow factory close to where this painting was made. The water quality was poor and there are various accounts of residents complaining that the once abundant fish stocks had been completely killed off, the river was even beginning to give off an offensive odour. In the following years there was a concerted effort to clean up the river, and by 1910 the Maribyrnong river had been transformed from an industrial transport route into back a pleasant waterway for pleasure craft leading up to the Rivoli Tea Gardens.

Presented side-by-side at Incinerator Gallery, this work by John Thallon is coupled with the above work by Marlene Young and seeks to offer new, contrasting vantages and understandings to the diverse histories of the local area. 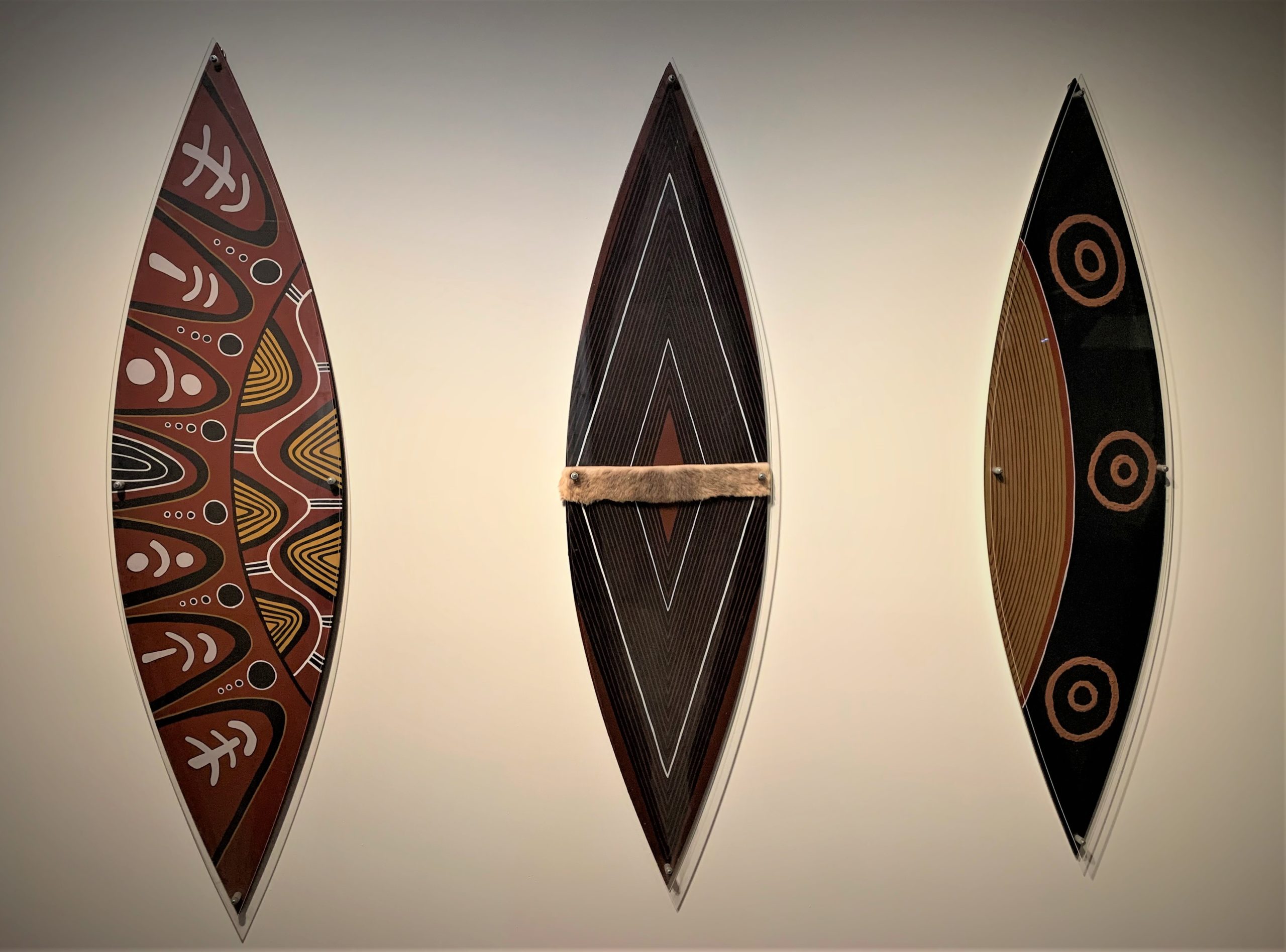 While these objects are labelled ‘shields’, Maree Clarke wrote in 2006 (when these works came into the MVCC collection) that “this shape is representative of many implements used in Victoria such as Shields, Canoes and Scar Trees, drink and food containers also Baby Carriers.”

Maree Clarke is a Yorta Yorta/Wamba Wamba/Mutti Mutti/Boonwurrung woman who grew up in northwest Victoria, mainly in Mildura, on the banks of the Murray River. Maree has been a practicing artist living and working in Melbourne’s West, not far from the Maribyrnong for the last three decades.

Maree Clarke is a pivotal figure in the reclamation of southeast Australian Aboriginal art practices, reviving elements of Aboriginal culture that were lost – or laying dormant - over the period of colonisation, as well as a leader in nurturing and promoting the diversity of contemporary southeast Aboriginal artists.

Maree’s continuing desire to affirm and reconnect with her cultural heritage has seen her engage in the traditional production of possum skin cloaks, together with the creation of contemporary designs of kangaroo teeth necklaces, river reed necklaces and string headbands adorned with kangaroo teeth and echidna quills. 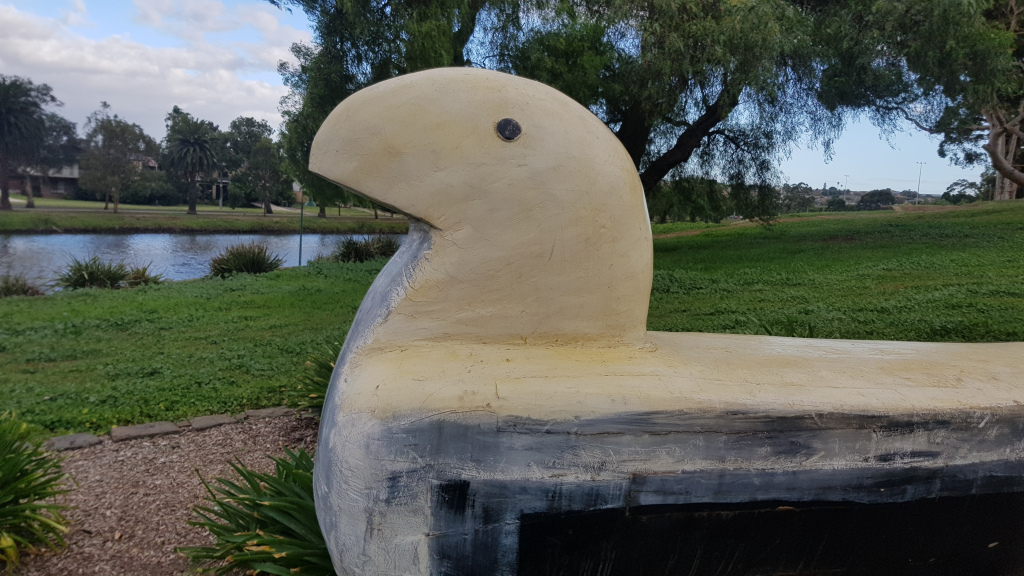 Bruce Armstrong is one of Australia's best known artists for his monumental sculptures. Often hewn from red-gum, he has created iconic outdoor public sculpture in cities all over Australia. Popular works include Bunjil (2002), the impressive eagle that stands assertively above the Docklands precinct in Melbourne, and Guardians (1987), the fierce dog-like figures that stood for many years outside the entrance to the National Gallery of Victoria on St Kilda Rd.

His sculptures are loaded with ideas that revolve around spirit and place, mythology and the landscape. Often exhibited in urban spaces, they remind us of the timelessness of the land, and the ephemeral nature of the urban environment. Despite exploitation and often human-imposed degradation of the natural environment, Armstrong’s large mythical sculptures are heart-warming and optimistic reminders that nature has always, and is still, protecting and nurturing.

On the banks of the Maribyrnong, not far from the Raleigh Street bridge, Bruce Armstrong’s sculpture Everybird (1999) sits and watches over a beautiful bend of the river. Built into the slope on the land of the Wurundjeri Willam people - it almost looks as if it is coming out of the earth, a living monument that is a part of the landscape. This larger-than-life wooden bird roosts at the edge of the Maribyrnong River as a long-standing guardian, celebrating the mythology of Bunjil, the Kulin Nation creator deity and ancestral being. It seemingly acts like a guardian watching over the people, protecting them. At the same time, it is a reminder of the profound, even solemn, beauty of nature that is so abundant on that part of the river.

David WADELTON
Watching and Being Watched 2000
oil on canvas 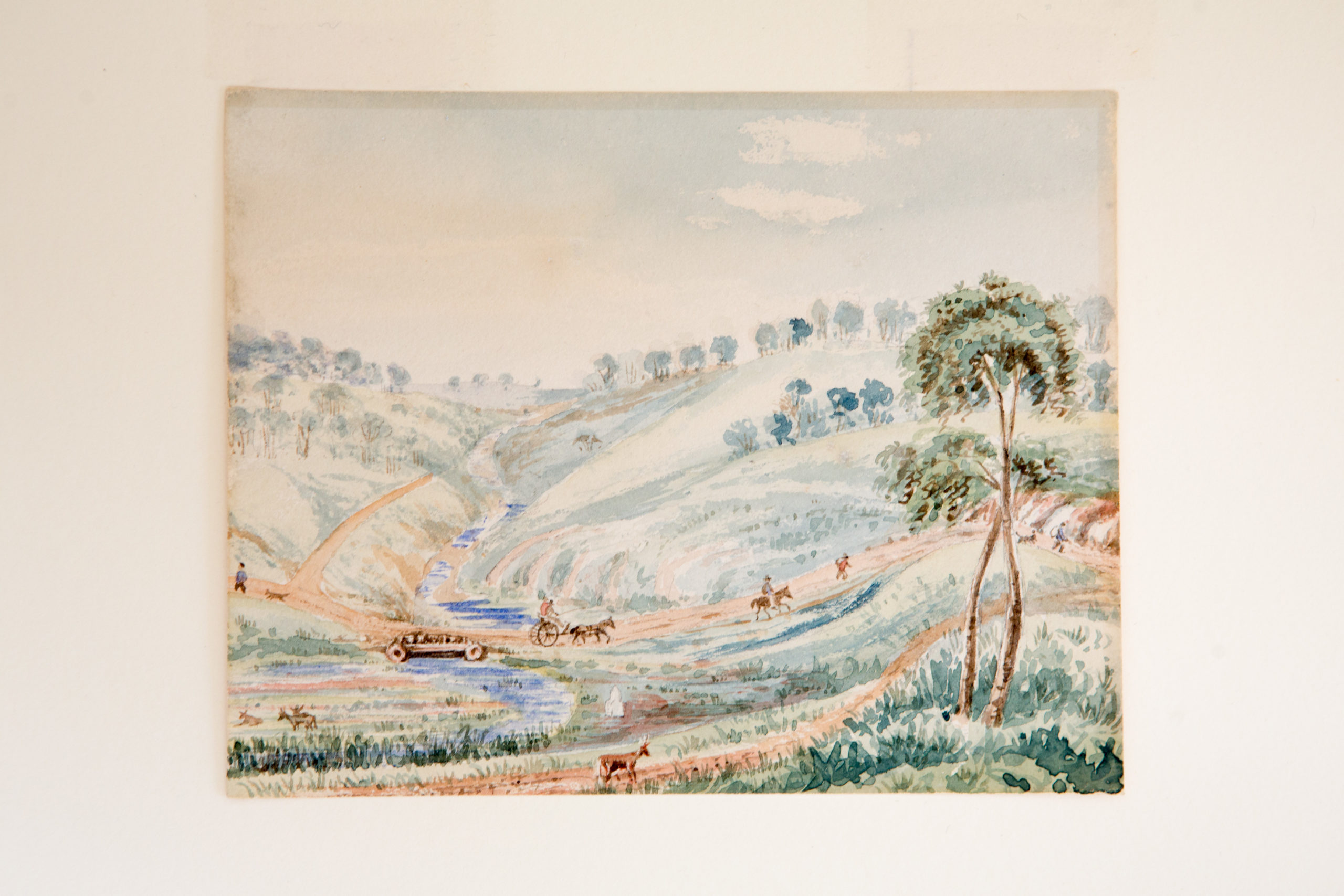 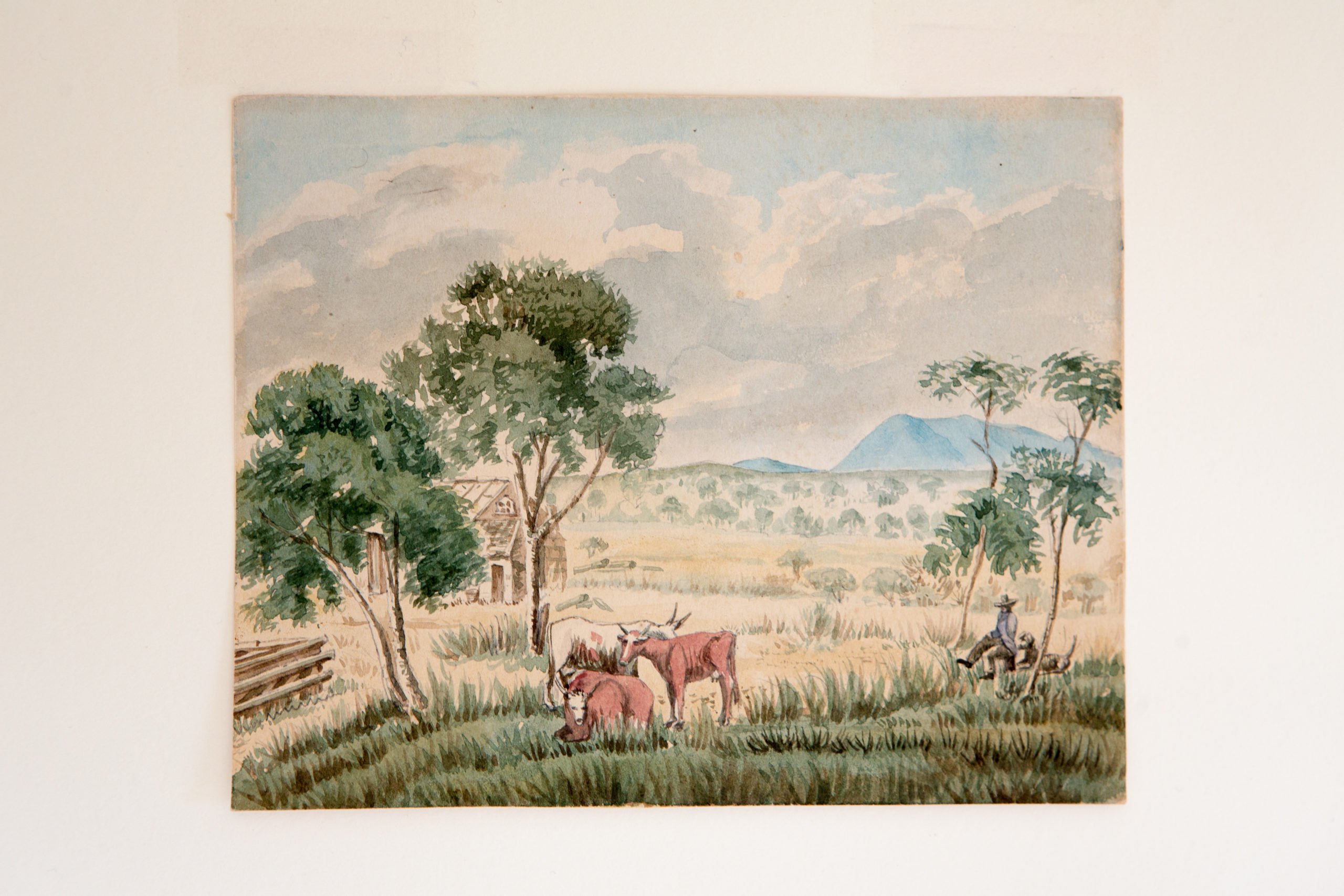 These two works - Robert Hoddle, above, and David Wadelton, below - depict roughly the same stretch of the Moonee Ponds Creek, 153 years apart. This is the area close to where Flemington bridge is today.

Robert Hoddle painted the Maine’s Bridge landscape in 1847, only twelve years after Melbourne had begun. The lightly wooded grasslands that covered much of Melbourne’s West were still intact, they had been created and maintained by the Wurundjeri Woi wurrung people over a period of thousands of years. Almost all of the original landscape has now been lost with only isolated pockets of remnant grasses and relatively small rehabilitated areas surviving.

In contrast to this, David Wadelton depicts the ominous Citylink overpass that now stands on the same spot, obliterating any view of Moonee Ponds Creek. The grey cathedral-like structure is overwhelming in the crowded space, the green colours of nature have been forced into tight spaces between the slabs of concrete and asphalt.

The only sign of humanity in the painting is the eye. But rather than this humanising the image, David Wadelton uses a motif that we associate with Surrealism - it heightens the sense of surveillance and even paranoia. This industrial and technological landscape does not create awe, it provokes a sense of unease and anxiousness. It is unsettling. 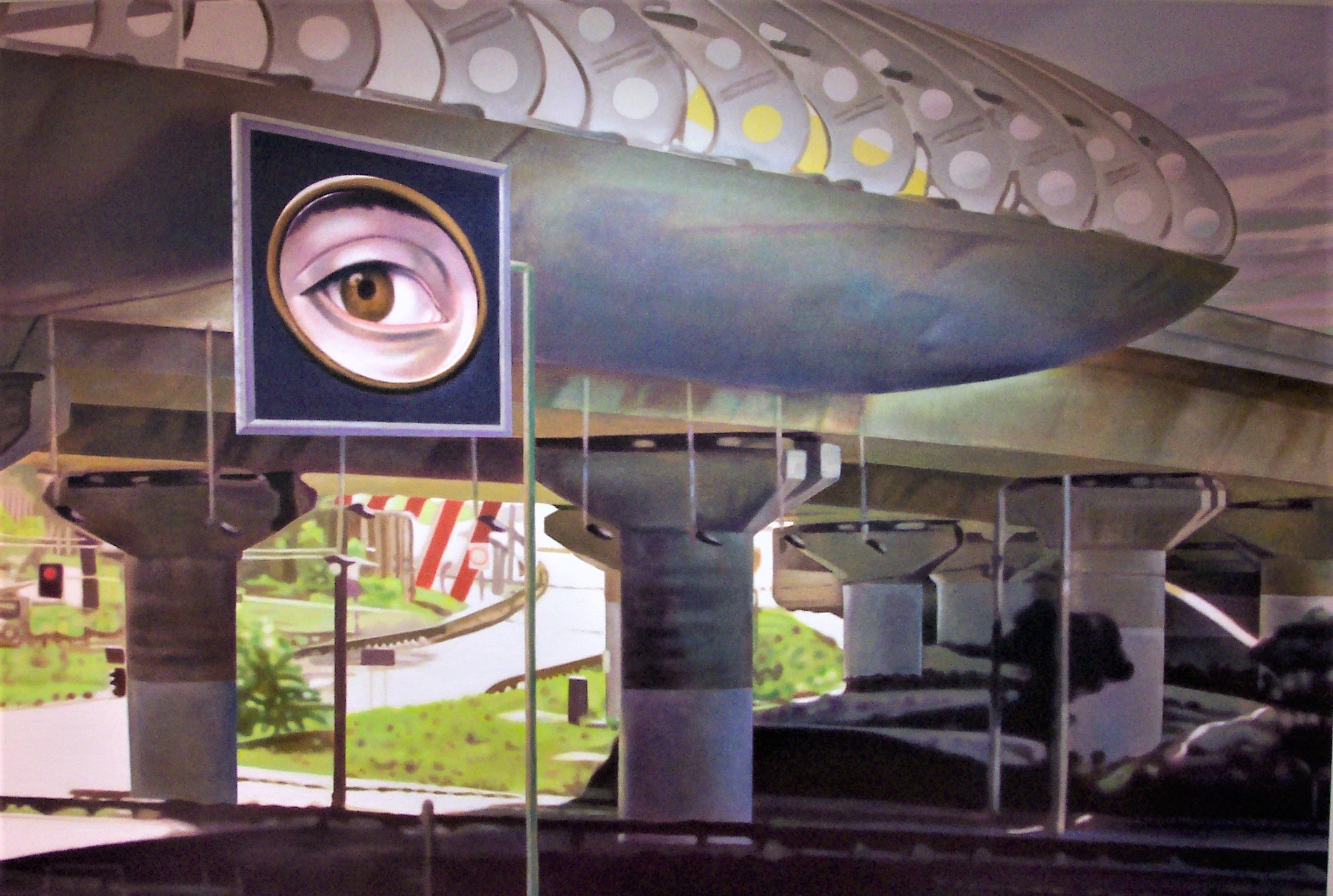